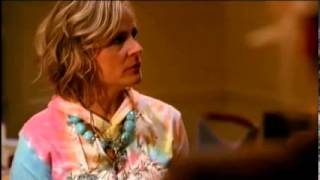 Brenda Johnson (Kyra Sedgwick) arrives from Atlanta to lead the LAPD's Priority Homicide Division, the special division that deals with explosive high-profile criminal cases. Almost immediately, her mix of brassy toughness and Southern sass begins to rub the mostly male policemen the wrong way. They resent this eccentric, folksy, and occasionally neurotic woman running the show. But when it comes to her CIA-trained interrogation skills, they're forced to admit that she's a pro's pro, a psychological surgeon who gets inside the subjects' minds and draws out their darkest secrets and confessions. And that's why she's the closer.

In the hot first series, Johnson and her team tackle the rape and murder of a Congressman's daughter, an escalating gangland war, the assassination of an Iranian businessman, and other delicate and dangerous California crimes. Through all this, Johnson deals with her troubled past, her problematic romances, and even betrayal by members of her own team.

Closer, The: The Complete First Season
Synopsis: An offbeat personality, a tough-as-nails approach and a track record as one of the country's leading investigators--these are just a few of the traits exhibited by television's next great detective, Deputy Chief Brenda Leigh Johnson, played by three-time Golden Globe Award nominee Kyra Sedgwick in "The Closer." In her first lead role in a dramatic series, Sedgwick plays a tough CIA-trained detective, with Southern charm, who has been brought from Atlanta to Los Angeles to head up the Priority Murder Squad, a special unit of the LAPD that handles sensitive, high-profile murder cases. "The Closer" is executive produced by the team behind "Nip/Tuck."