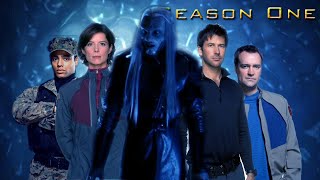 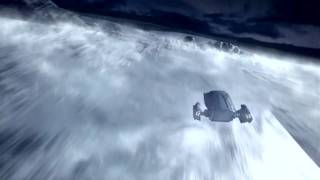 A team of scientists and military personnel is dispatched to the distant Pegasus galaxy to explore the remnants of the Lost City of the Ancients--also known as Atlantis--in this first season of the STARGATE SG-1 spin-off series. The Ancients were an advanced human race that initially created the Stargate network, and diplomat Dr. Elizabeth Weir (Torri Higginson) and pilot Major John Sheppherd (Joe Flanigan) head the international squad that is sent to investigate. The team arrives at Atlantis to find the city abandoned and their ship permanently stranded, unless they can find a power source to get themselves home to earth. They make contact with a brave but primitive native civilization as well as with the evil Wraith, a species that feeds on fear and, it quickly becomes clear, poses a threat to human life everywhere. Sheppard's brash, instinctive nature contrasts with the calm thoughtfulness of Dr. Weir, and their team is rounded out by Sheppard's second-in-command Lt. Aidan Ford, witty Scottish doctor Carson Beckett, Pegasus native leader Teyla Emmagen, and inimitable scientist Rodney McKay. The 20 episodes of the first season have the Stargate team feeling their way around this dangerous new galaxy and interacting with its varied inhabitants, while being forced to work as a team and learn more about each other as well.