He'll risk everything to beat the system. 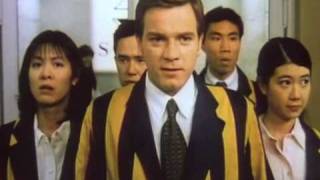 It's the year 1999, and Earth is embroiled in a Global War that is systematically destroying every country involved. However, the year brings great change to Earth in the form of a giant alien spaceship that astronomers have discovered is hurtling towards Earth. It crashes in the South Pacific, on Macross Island, and soon the Global War has stopped and the world's best scientists have devoted themselves to restoring the technologically advanced battlefortress that has fallen to Earth. Ten years later, Project Robotech has been completed, and the SDF-1 is ready for its maiden voyage. Unfortunately, the SDF-1 has attracted a Zentraedi armada who want to claim the ship as their own. So, a war begins with Captain Gloval struggling to defend the ship with the alien technology of the SDF-1 as the men of the Earth's Veritech Fighters, led by Lieutenant Commander Roy Fokker, struggle to keep up with the superior alien firepower. An involving and exciting space opera that has been immensely popular since its release, ROBOTECH is a landmark Animé. This collection includes episodes 7-12 of the series' MACROSS SAGA.