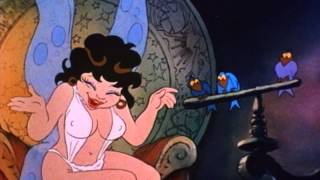 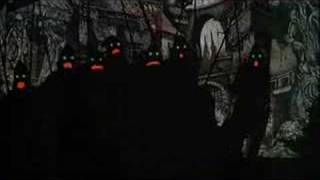 This uniquely 1970s blend of swords, sorcery, science fiction, kung-fu, fascism, and nuclear holocaust was director Ralph Bakshi's first venture into fantasy after his grim urban epics STREETFIGHT and HEAVY TRAFFIC. In a postapocalyptic future that appears as a blend of World War II Europe and J.R.R. Tolkien's Middle-earth, a pint-size wizard named Avatar (Bob Holt, sounding like Peter Falk) must save the world from a band of fascist mutants controlled by his evil twin brother, Blackwolf (Steve Gravers), who likes to confuse enemy armies by projecting films of Adolf Hitler speeches during attacks. Painted live-action footage of advancing Nazi armies contrasts with Saturday-morning-cartoon-style animation of fairies and elves as Avatar travels through various magical and radioactive realms on his quest. Aiding him are a sexually promiscuous fairy queen (Jesse Wells), a hot-blooded warrior elf (Mark Hamill, fresh from his role in STAR WARS) and Peace (David Proval), a misunderstood robot rebelling against his Blackwolf-controlled programming. A bizarre and psychedelic meditation on magic vs. technology, this cult film still finds an audience on college campuses and will prove quite rewarding to viewers in the right frame of mind.

Ralph Bakshi's animated futuristic fantasy depicts a battle between magic and technology as a kindhearted old sorcerer named Avatar embarks on a perilous quest into darkness to save the world from his evil brother's black magic.