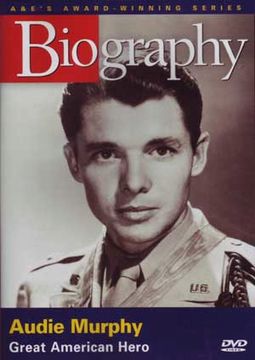 16 ratings
Currently Out of Stock: We'll get more as soon as possible
Notify Me When Available
Add to Wishlist
Format:  DVD
item number:  327D4
Related products:
The Red Badge of Courage for $11.10
Texas Brooklyn and Heaven for $5.95
Audie Murphy Westerns Collection (Sierra / Ride Clear Diablo / Drums Across the River / Ride a... for $37
To Hell and Back for $12.50
The Duel at Silver Creek for $8.40
91% recommend us!

Audie Murphy was an average guy from Texas, but he became a war hero during World War II, and was one of the most decorated soldiers in history. Upon his return, Murphy caught the attention of James Cagney, through whom Murphy made the necessary Hollywood connections to embark upon an acting career. Eventually garnering success in THE RED BADGE OF COURAGE, Murphy also starred as himself in the movie based on his autobiography, TO HELL AND BACK. This A&E Biography special details the hero's exploits, including the time he single-handedly held off 250 German solders and six tanks, and the 33 military decorations he received. But the dark side of Murphy's experiences is also revealed. From the young boy who couldn't wait to join the Army, he grew into a man haunted by his experiences, suffering post-traumatic stress disorder (then called battle fatigue) that he tried to stave off with gambling and prescription pills. The tragedy and heroism in the life of this quintessential American is brought to life through movie clips, newsreel footage, and interviews with Murphy's sisters and others close to him.

No Substitute for Victory: From Vietnam to Iraq (DVD)
$8.70 Super Savings
Add to Cart