One Minute To Zero 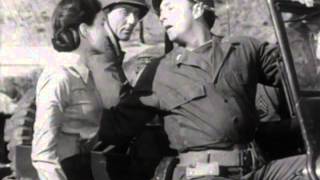 One Minute To Zero (Trailer)

Using refugees as human shields, North Korean troops advance on Col. Steve Jankowski and his dug-in troops. Hoping to turn the throng back, Jankowski orders his gunners to fire warning shots short of the advance. Again and again the cannons roar, aiming closer each time. The approach continues: Jankowski must make an agonizing decision.

Robert Mitchum portrays Jankowski, a leader of U.S. forces that are part of the United Nations Coalition pushing back against the invasion south of the 38th Parallel. Tay Garnett (Bataan, The Cross of Lorraine) directs, effectively integrating documentary footage of the conflict. Ann Blyth plays a UN official drawn to Jankowski. And it wouldn't be a war flick without a tough top kick -- a role Charles McGraw fits perfectly.

Set during the Korean War, a tough battle hardened soldier who still retains a soft side, wins the heart of a lovely girl. Includes actual war footage.

The setting of this romance-action film is the Korean War. Colonel Steve is a war hero and professional soldier whose thankless task is to help fend off the swarms of Communist infantry that are invading south of the 38th parallel. Colonel Steve's love affair with Linda Day, a United Nations worker, ends suddenly when she sees him fire on a group of fleeing refugees. But is that what really happened'..