The ways of the West are outrageously unsaddled in this rowdy comedy. Sinatra -- always on the grift and always in red-flannel longjohns when it's time for boudoir activity -- plays ring-a-ding Dingus. Kennedy is the addled sheriff on his trail. 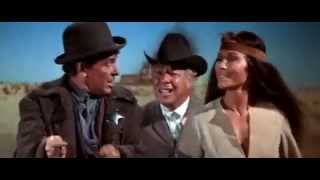 Dingus Magee wants to flag a ride. "Hold up!" he yells to a rolling stagecoach. "It's a holdup!" shouts the coach driver's panicked sidekick, who tosses a jewel-packed strongbox over the side. Magee, who began his criminal escapades with a $10 price on his head, is suddenly wanted for much, much more.

The ways of the West are outrageously unsaddled in this rowdy comedy deftly directed by Burt Kennedy (Support Your Local Sheriff, The Rounders). Frank Sinatra -- always on the grift and always in red-flannel longjohns when it's time for boudoir activity -- plays ring-a-ding Dingus. George Kennedy is the addled sheriff on his trail.

A bawdy, broad comedic western that lampoons the code of the west. This unbridled farce stars Frank Sinatra as an outlaw who is about as successful at stealing as he is at his other occupation, ass-breaking. Sinatra, as the appropriately named Dingus, meets up with old friend Hoke Birdsill (George Kennedy) and immediately tries robs him. When a mayor/whorehouse madame appoints Hoke to be sheriff, it isn't long before Dingus is locked up. He is soon sprung, though, on the promise that he will stir up trouble with local Native Americans in the hopes that the cavalry, the bordello's biggest customers, don't be called out of town. The comedy in this 1970 feature tends to be lowbrow and corny, but it is also a sly send-up of the old west and America's confused morals. In addition, the film boasts historical references to Little Big Horn and John Wesley Hardin (played by character actor Jack Elam). The satiric tone and sense of history could very well come from co-scriptwriter Joseph Heller or the David Markson novel upon which the film is based. Guitarist Billy Strange adds some of his distinct music.

Thieves | Slapstick | Farce | Native Americans | Old West
This product is made-on-demand by the manufacturer using DVD-R recordable media. Almost all DVD players can play DVD-Rs (except for some older models made before 2000) - please consult your owner's manual for formats compatible with your player. These DVD-Rs may not play on all computers or DVD player/recorders. To address this, the manufacturer recommends viewing this product on a DVD player that does not have recording capability.

Texas Across the River
$19
Add to Cart