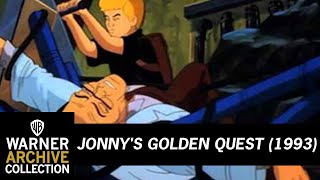 In the first feature-length animated movie based on the Hanna-Barbera series, Jonny Quest fans get to meet the women behind the adventurous men. Joining scientist Benton Quest, his plucky son Jonny, bodyguard Race Bannon and Jonny's young pal Hadji are Benton's biologist wife Rachel, Race's ex-wife Jade and young 12-year-old Jessie, who harbors a big secret. Throughout, Team Quest battles the evil schemes of modern-day alchemist Dr. Zin, who has cloned himself and created an army of mutant reptiles in the Peruvian rain forest. The clash there results in a tragedy that changes Jonny's life forever -- and later leads to a worldwide pursuit of Zin that includes examining rare Leonardo da Vinci documents in Paris, exploring the Roman catacombs and a final confrontation in the Australian outback.

Jonny Quest and the Quest Headquarters receive an urgent call to investigate the cause of hideous animal mutations in the rain forest of Peru.

Adventure | Mutants
This product is made-on-demand by the manufacturer using DVD-R recordable media. Almost all DVD players can play DVD-Rs (except for some older models made before 2000) - please consult your owner's manual for formats compatible with your player. These DVD-Rs may not play on all computers or DVD player/recorders. To address this, the manufacturer recommends viewing this product on a DVD player that does not have recording capability.

The Shape of Water
$8.70 Super Savings
Add to Cart

15%off
Yogi Bear and the Magical Flight of the Spruce Goose
$11.10
Add to Cart