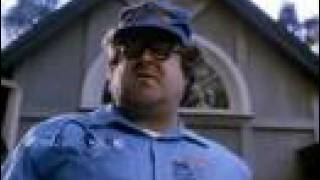 A deadly South American spider is inadvertently brought to the U.S. where it mates with one of the locals and spreads panic in a small California town. A big budget horror movie with a sense of humor.

Arachnophobia
Hollywood Pictures and Amblin Entertainment deliver the year's most electrifying big-screen roller coaster ride of a movie! Everyone is afraid of something ... for Dr. Ross Jennings (Jeff Daniels), his phobia is downright embarrassing. But when he moves his family to a small town, the one thing that bugs him most is now harming the townspeople at an alarming rate. For this unlikely hero, overcoming a childhood fear of spiders might just save the community, but it may already be too late! Directed by Frank Marshall (Executive Producer, BACK TO THE FUTURE, Producer, RAIDERS OF THE LOST ARK) and also starring John Goodman, this critically acclaimed breathtaking hit entertains with its terrific mix of thrills, chills, and laughter!

The film's opening moments picture an insect expert digging up and then tracking the travels of a poisonous male spider who has burrowed in the coffin of one of its victims from the Venezuelan jungle to California. Although the scientist knows they are deadly, he wants to pursue his research regardless of the danger.
Then the film cuts to a doctor and his wife leaving the hustle and bustle of San Fransisco and moving out to the country. When they arrive, he becomes the town doctor, but he soon earns the nickname "Dr. Death" because none of his patients survive. At first, he can't understand what's killing so many people; then he realizes the disease might be caused by a rare breed of spider. Not even the exterminator believes him -- until it is almost too late.