The Watcher in the Woods PG 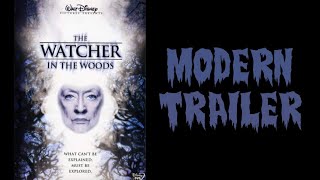 The Watcher in the Woods (Modern Trailer)

In this spooky suspense film, an American family moves into a creepy manor house located within a wooded area in the English countryside. Before long they start to see some odd things, like mirrors that don't reflect, and the ghost of blindfolded girl. The new tenants learn that 30 years ago, a teenage girl, who bears an uncanny resemblance to their daughter Jan (Lynn-Holly Johnson), disappeared nearby. Soon, the supernatural presence starts contacting both sisters.

The Watcher In The Woods
Legendary actress and two-time Oscar(R)-winner Bette Davis (DANGEROUS, 1935; JEZEBEL, 1938) stars in this frightening and atmospheric thriller. When an American teenager joins her family in an English country house, she experiences strange and supernatural occurrences. Mrs. Alywood (Davis), the kindly caretaker, knows the dark secret behind the happenings ... and prepares for the return of a young girl who died mysteriously some 30 years earlier! THE WATCHER IN THE WOODS weaves a haunting, riveting tale that stays with you long after the explosive ending!

22%off
Escape to Witch Mountain
$11.70 Super Savings
Add to Cart

22%off
Something Wicked This Way Comes
$11.70 Super Savings
Add to Cart

The Amityville Horror
$6.40
Add to Cart