Julie Benton married a murderer, an insanely jealous man who killed her first husband to marry her. When Julie learns the truth, she escapes him in a desperate attempt at a new life. But her husband has no intention of letting Julie go...ever. 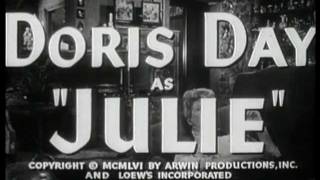 Has beautiful Julie Benton married a murderer, an insanely jealous man who killed her first husband in hopes of marrying her? When Julie learns the answer is yes, she escapes him in a desperate attempt to forge a new life, taking a job as a stewardess. But her husband has no intention of letting Julie go...ever.

Doris Day and Louis Jourdan star as pursued and pursuer in this non-stop, double-Oscar-nominated thriller built around the kind of woman-in-peril plot that always jangles audiences' nerves and is a specialty of writer/director Andrew L. Stone (Cry Terror!, The Last Voyage). As if a mad stalker isn't enough, Julie tosses in a great Hollywood ending: our heroine piloting a jetliner to a San Francisco landing, the fate of passengers and crew in her hands.

JULIE is most enjoyable if one doesn't take it too seriously. Doris Day plays Julie Benton, whose off-the-coop musician husband Lyle Benton (Louis Jourdan) confesses that he in fact killed Julie's first husband. She immediately recognizes that he is so possessive of her that he would sooner rub her out than lose her altogether, and leaves Lyle, seeking protection under the wing of a country club acquaintance, Cliff Henderson (Barry Sullivan).
The San Francisco police deduce that Julie is in danger from Lyle, and begin to close in on the poor woman to protect her, but she inadvertently misses them. In the film's thrilling final sequence, Julie has returned to the stewardess job she once held - without realizing that Lyle has boarded the plane sans detection, planning to murder out most of the crew and take her out next. Silent film star Mae Marsh, a "regular" in the films of director Andrew L. Stone, appears in the closing scenes as an hysterical passenger.

Action | Death | Thriller | Murder | Disasters | Flying
This product is made-on-demand by the manufacturer using DVD-R recordable media. Almost all DVD players can play DVD-Rs (except for some older models made before 2000) - please consult your owner's manual for formats compatible with your player. These DVD-Rs may not play on all computers or DVD player/recorders. To address this, the manufacturer recommends viewing this product on a DVD player that does not have recording capability.

The Ballad of Josie
$19
Add to Cart