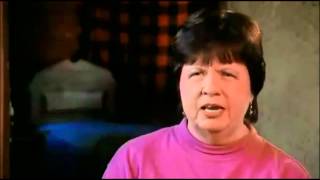 In sixteen chilling tales of the supernatural, on 3 DVDs, New Dominion Picture's
A Haunting, takes you inside real-life horror stories. The series originally aired on the Discovery Channel, and each eerie one-hour episode features eyewitness accounts recorded, filmed in the actual locations where these apparitions took place. They are all but guaranteed to spook even the most skeptical observer, but you can judge for yourself: are they imagined, or are they real'
Episode by episode, you'll be shocked and surprised by the spell-binding tales. Take the case of the dance club haunted by ghosts from a by-gone era, the child inhabited by evil that only an exorcism will cure, or house-haunting specters, scaring the wits out of their unsuspecting victims. A Haunting explores these and many other unexplainable, eerie, and macabre tales of the paranormal.
By the end of each amazing story, you will experience a lingering sense that life and death are much stranger than you could have possibly imagined!
Source - Timeless Media Group