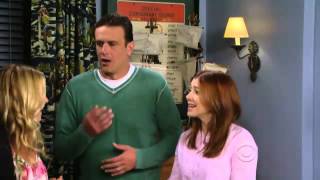 How I Met Your Mother - Season 8 Trailer

Though HOW I MET YOUR MOTHER has the look of a traditional, multi-camera sitcom, this comedy has all the fun and smarts of fellow critical darlings 30 ROCK and ARRESTED DEVELOPMENT. Told via a giant flashback, the twist-filled series is narrated from the perspective of Ted Mosby in the year 2030 as he tells his daughter and son how he met their mother more than 20 years ago. Young Ted (Josh Radnor) is inspired by the romance of his roommate Marshall (FORGETTING SARAH MARSHALL's Jason Segel) and his fiancée Lily (BUFFY's Alyson Hannigan), and he decides to embark on his own search for love. Aided in his quest by wingman Barney "Have you met Ted'" Stinson (Neil Patrick Harris), Ted looks all over New York City for the future Mrs. Mosby. When he meets Robin (Cobie Smulders), he thinks his quest may be over, but it's not as easy as it seems. HOW I MET YOUR MOTHER boasts a strong cast, but it's Harris who steals every scene as the womanizing Barney, who has the most quotable catchphrases since SEINFELD. Suit up for every episode of the show's first season.

How I Met Your Mother - Challenge Accepted - T-Shirt
$18.98 on Sale
Select Options