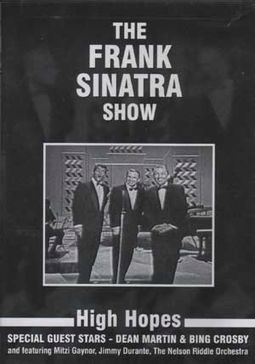 This show was taped on October 19, 1958. The special guest stars and Dean Martin and Bing Crosby and includes Dean Martin's less than subtle commercial for his Hollywood restaurant whilst performing "Wrap Your Troubles in Dreams." Also appearing are Mitzi Gaynor and a cameo by Jimmy Durante.

This nostalgia-inspiring episode of the Timex-sponsored variety show, hosted by Frank Sinatra, was taped in October 1958, and features guest stars Bing Crosby, Dean Martin, and Mitzi Gaynor. A cameo by Jimmy Durante completes the star power that's present here, featuring some of the most popular performers of the 20th century. The archive footage includes Martin's amusingly shameless promotion of his Hollywood restaurant, while Timex does its own promotion in commercials that appear quaint and charming today. The songs include a hilarious performance of "Together" (Sinatra, Crosby, and Martin), and Sinatra's "Angel Eyes," "The Lady Is a Tramp," and "High Hopes."

Frank Sinatra
The Ultimate Collection
$5.98 on Sale
Add to Cart