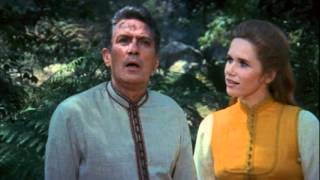 The official theatrical trailer for LOST HORIZON in HD

When passengers survive a plane crash in the Himalayas they end up in the mystical world of Shangri-La, an idyllic oasis where art, culture and the knowledge of the world are treasured. In Shangri-La, the survivors learn about beauty, peace and serenity -- and, for some, true love.

Based on the classic James Hilton novel, with an all-star, award-winning cast, Lost Horizon is the ambitious musical remake of the Frank Capra classic. With deleted Burt Bacharach songs and sequences restored to the theatrical version of the film including: "The Fertility Dance/Living Together"; "Growing Together (Reprise)"; "If I Could Go Back"; "When Knowledge Ends (Faith Begins)"; and "I Come to You." Including special vintage featurettes, this much sought-after version of the film is packed with extras. Newly remastered.

James Hilton's beloved fantasy novel about the land of Shangri-La was given an awkward musical treatment in this extravagantly produced flop. Larry Kramer's screenplay stays close to the 1937 Frank Capra original, as a plane fleeing China crashes in the Himalayas and a mixed group of survivors discovers the magical, peaceful land of Shangri-La. Here the film becomes a full-fledged musical, with songs by Burt Bacharach and Hal David illustrating the distant realm's nature and the conflict that happiness causes amongst the survivors. Curiosity-seekers may be intrigued by the film's reputation as a notorious dud, but fans of the story would be better served by the classic original, despite a cast of well-respected names, including Peter Finch (in the Ronald Colman role), John Gielgud, Liv Ullmann, and Charles Boyer.

Dance | Fantasy | Science-Fiction | Escape | Kidnapping | Dancing | Crashes | Fantasy Worlds
This product is made-on-demand by the manufacturer using DVD-R recordable media. Almost all DVD players can play DVD-Rs (except for some older models made before 2000) - please consult your owner's manual for formats compatible with your player. These DVD-Rs may not play on all computers or DVD player/recorders. To address this, the manufacturer recommends viewing this product on a DVD player that does not have recording capability.

Customer Rating:
Based on 2615 ratings.


I loved this movie when it originally came out in 1973. I am a musical fan and especially enjoy the music of Bacharach & David. There was much criticism of the movie when it came out, but I enjoyed the songs and the story and the sets. The film is jam-packed with big name stars of the time which makes it even more enjoyable. I am looking forward to getting this DVD-R. I have purchased another movie in this format and it worked perfectly. I recommend this film.