Get email alerts for Marvin Gaye
18 ratings
Currently Out of Stock: We'll get more as soon as possible
Notify Me When Available
Add to Wishlist
Format:  CD  (2 Discs)
sku:  C24J
Our customers love us!

Marvin Gaye, Tammi Terrell- Ain't Nothing Like The Real Thing...AND some other fantastic Duos! (Music Video) 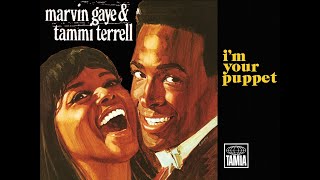 Personnel includes: Marvin Gaye, Tammi Terrell (vocals); Johnny Bristol, Harvey Fuqua, Valerie Simpson, Nickolas Ashford, The Andantes, The Spinners (background vocals).
Producers include: Harvey Fuqua, Johnny Bristol, Berry Gordy, Nicholas Ashford, Valerie Simpson.
Compilation producer: Harry Weinger.
Includes liner notes by Brian Chin.
Digitally remastered by Jeff Willens (Universal Mastering Studios East).
Personnel: Henry Fambrough, Pervis Jackson, Marlene Barrow, Harvey Fuqua, Jackie Hicks, Chico Edwards, Johnny Bristol, Louvain Demps, Nickolas Ashford, The Andantes, The Spinners , Valerie Simpson, Billy Henderson (background vocals).
Audio Mixers: Harry Weinger; Kevin Reeves.
Most listeners will be satisfied enough with a best-of compilation to cover the work that Gaye and Terrell did together. Those who want to hear more should make The Complete Duets their next and only subsequent stop. The two-CD collection includes everything from their three Motown duet albums, along with the previously unreleased "We'll Be Satisfied," an alternate take of "Ain't Nothing Like the Real Thing," and an alternate vocal of "Keep on Lovin' Me Honey." For good measure, the second half of disc two is devoted to rare solo Terrell sides. That includes four songs from 1965-1966 singles, including the non-LP B-side "Baby Don'tcha Worry," all of which were also released as duets with added Gaye vocals; it sounds like they're trying to make her a mini-Mary Wells on "Hold Me Oh My Darling." There are also nine previously unreleased Terrell solo tracks (though all of the songs were also featured, with Gaye on duet vocals, on the Gaye-Terrell LPs). It would have been good for the otherwise satisfactory liner notes to include more specific details on those unreleased Terrell items, and in all the non-hits on the package are enjoyably generic late-'60s Motown, rather than being of particularly exceptional merit. At the same time, it's of reasonably strong consistency and a useful compendium of the total known output of one of soul's top duets. ~ Richie Unterberger

The Velvelettes
The Motown Anthology
$10 CD Sale
Add to Cart

Customer Rating:
Based on 18 ratings.


MARVIN GAYE AND TAMMI TERRELL ARE THE GREATEST SINGING DUO OF ALL TIME! ALL THEIR SONGS REPRESENT LOVE WHICH IS SORELY MISSING WITH TODAYS INFERIOR MUSIC! THIS CLASSIC COLLECTION CONTAINS ALL THE HITS AND CUTS THAT SHOULD OF BEEN LIKE HITS LIKE SAD WEDDING, KEEP ON LOVIN ME HONEY AND MEMORY CHEST! EVEN THOUGH MARVIN+TAMMI WERENT ROMANTICALLY INVOLVED,THEIR MUSIC WILL LIVE ON FOREVER AS A TESTAMENT OF WHAT ROMANTIC MUSIC IS TRULY ALL ABOUT!

41%off
The Temptations
The Definitive Collection (CD)
$8.30 CD Sale
Add to Cart