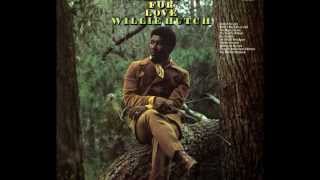 All tracks have been digitally remastered using the original master tapes.
This is part of Motown Records' Very Best series.
One of the unsung heroes of 1970s soul, Willie Hutch was never the big name he deserved to be. The smooth singer/composer had a few major and moderate hits, but commercially, he didn't make it to the level of Marvin Gaye, Ronald Isley, and Curtis Mayfield (all of whom he inspires comparisons to). Released in late 1998, The Very Best of Willie Hutch spans 1972-1982 and reminds us how engaging a singer he was in his heyday. Hutch could get funky when he wanted to, and he does so with splendid results on "Get Ready for the Get Down" (a number 24 R&B hit), "Brothers Gonna Work It Out," and the theme from the 1973 blaxploitation film Foxy Brown. But for the most part, Hutch made his mark as a romantic crooner. It is Hutch's smooth, romantic side that prevails on "Sunshine Lady," "I Choose You," "What You Gonna Do After the Party," and his inspired makeover of Barbra Streisand's "The Way We Were." Appropriately, the CD opens with Hutch's biggest hit: the perky, feel-good anthem "Love Power," which went to number nine on the R&B singles charts. Full of gems that were recorded during Hutch's peak years, this CD is essential listening for lovers of 1970s soul. ~ Alex Henderson

William DeVaughn
Be Thankful For What You've Got - A Golden Classics Ed.
$12.68 CD Sale
Add to Cart

Willie Hutch
Party Down / Shake It, Shake It
$4 on Sale
Add to Cart