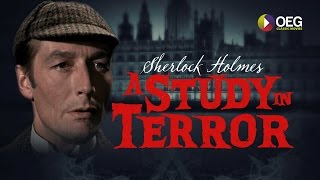 A Study In Terror 1965 Trailer

Three of 19th Century England's most famous characters come together for the first time in this sumptuous, exciting mystery, as Sherlock Holmes and Dr. Watson set out to bring down history's most notorious serial killer: Jack The Ripper! When a suspicious package arrives at the master sleuth's Baker Street home, he and his old friend must join the hunt before more murders are committed... even though the trail may lead to places they'd rather not go. John Neville is one of the most authentic Holmes portrayers ever, and he's ably supported by Donald Houston as Watson, as well as such British acting royalty as Anthony Quayle, Robert Morley, Frank Finlay, Barbara Windsor, Cecil Parker and, in one of her earliest screen roles, Academy Award® winner Dame Judi Dench (1998, Best Supporting Actress, Shakespeare in Love).

Murder by Decree
$10
Add to Cart