Love is here to stay... so is her family. 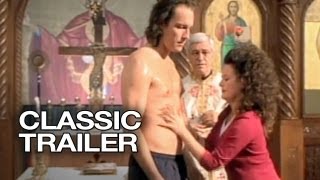 Toula Portakalos (Nia Vardalos) feels trapped in her large Greek family, where women are expected to do only three things: "marry Greek men, have Greek babies, and feed everyone until the day they die." Rebelling against this fate, Toula quits the family restaurant, goes to college, fixes her hair, and falls in love with Ian (John Corbett), a guy who is way-too-good-to-be-true, and not Greek. This horrifies Toula's Greek culture-crazed father (Michael Constantine) and sets off a major culture clash between her loud, eccentric family (whose activities include roasting whole lambs on the front-yard barbecue spit) and Ian's subdued, overcivilized Anglo-Saxon parents.

Based on Vardalos' own autobiographical one-woman play, MY BIG FAT GREEK WEDDING is that rare romantic comedy that has the courage to trust its simple, human story and not resort to overwrought Hollywood sentimentality and phony glamour (all the characters in the film look and act like real people). It's also filled with big, fat, crowd-pleasing laughs, making it a wedding most worth attending. Co-produced by Tom Hanks, the movie is set in Chicago, but was filmed in Toronto. The spirited cast includes Lainie Kazan and Andrea Martin (of SCTV fame) as Toula's mom and aunt.

My Life in Ruins
$5.80 Super Savings
Add to Cart