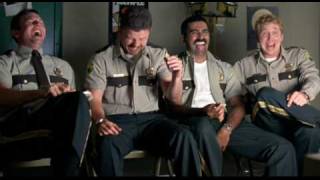 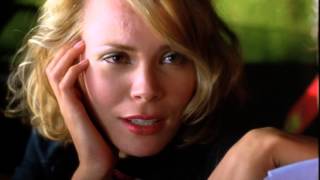 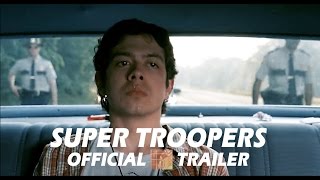 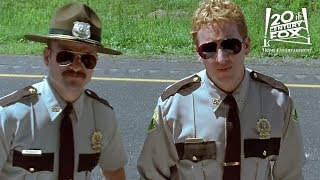 Broken Lizard, a comedy troupe formed by former students of Colgate University, wrote and star in the enjoyably lightweight comedy SUPER TROOPERS. They play state troopers who preside over a quiet stretch of highway in Vermont. The low crime rate allows them time to pursue their own interests--mostly playing elaborate pranks on each other and on the hapless speeders they stop. Their captain, O'Hagan (Brian Cox), asks them to settle down for a while, because the governor (an amusing cameo by TV's former WONDER WOMAN, Lynda Carter) is thinking of cutting off their funding and turning their precious highway over to the jurisdiction of the hated local cops, headed by the sneaky Chief Grady (Daniel Von Bargen). The wild and not very bright troops are unable to stay out of trouble, so they'll only keep their jobs if they somehow manage to crack a big drug case. Director Jay Chandrasekhar (who also stars as the smartest trooper, Thorny) does a great job of keeping things quick and light, and the easy camaraderie of the Broken Lizard troupe gives even the grossest humor in the film an appealingly playful quality, harkening back to the innocent days of movies like STRIPES.

Always looking for action, five over-enthusiastic, but under-stimulated Vermont State Troopers raise hell on the highway, keeping motorists anxiously looking in their rear view mirrors. Between an ongoing feud with the local cops over whose you-know-what is bigger and the state government wanting to shut them down, the Super Troopers find themselves patrolling the boundaries of good taste as they hilariously and unwittingly skid towards solving the crime of their lives.