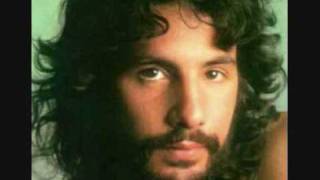 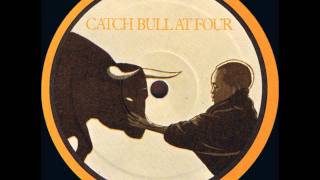 Personnel: Cat Stevens (vocals, acoustic guitar, Spanish guitar, electric mandolin, pennywhistle, piano, electric piano, organ, synthesizer, drums, percussion); Alun Davies (acoustic guitar, Spanish guitar); Andreas Toumazis (bouzouki); Del Newman (strings); Jean Roussel (piano, organ); Alan James (bass instrument); Gerry Conway (drums); Linda Lewis, C.S. Choir (background vocals).
Cat Stevens began to taper off the winning streak he'd scored with TEA FOR THE TILLERMAN and TEASER AND THE FIRECAT on this 1972 release. CATCH BULL AT FOUR still fared well commercially, yet it lacked the focus and immediate appeal of its predecessors. Still, the album showed Stevens's remarkable talent for writing insightful, moving lyrics and memorable, infectious melodies. Aside from the exuberantly joyous "I Can't Keep It In," the mood of CATCH BULL AT FOUR is a bit darker and edgier.
In "Sitting," for example, the singer is dogged by thoughts of stagnation and mortality while a chiming, minstrel-esque keyboard riff plays in the background. The somber mood is heightened by some hushed acoustic guitar-driven numbers ("Boy with a Moon and Star on His Head") and some stark piano ballads ("Sweet Scarlet"). The fact that Stevens was experimenting more with styles, arrangements, and dynamics here may have given some fans pause, yet his trademark charm is still in evidence, as is the dependable strength of his songwriting.