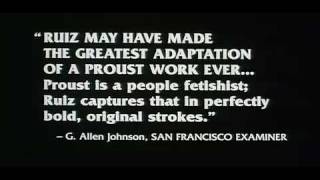 Raoul Ruiz directs this stunning, complex adaptation of the final volume of IN SEARCH OF LOST TIME, Marcel Proust's brilliant, epic masterwork. On his deathbed in 1922, Proust begins reflecting upon his past experiences, but the line between his actual life and the characters in his novels begins to blur together, until the two merges into one magical whole. The film features a seemingly endless barrage of extraordinary performances, as well as gorgeous photography by Ricardo Aronovich.

In 1922 France, the writer Marcel Proust is on his deathbed, scenes from the past flashing before his eyes. But what he is remembering is not his own life; he has become the narrator in a past filled with the characters and places of his fictional world. Director and cowriter Raoul Ruiz has fashioned a multilayered, complex, nonlinear examination of a writer who found more fulfillment in literature than in life. The author of the staggering landmark work REMEMBRANCE OF THINGS PAST, Proust was not a literary success in his lifetime; thus, as he is dying, he looks back not on his own life but the marvelous, exciting life of his characters as they wander through the upper echelons of Parisian social and literary circles. This extended roman-a-clef world that Proust built, based on composites of real people, is rife with complicated family relationships, betrayals, and secret romances amid a fin de siecle aestheticism. Ruiz holds nothing back in interpreting a book that is notoriously difficult to film--as the narrator Marcel wanders through this fictional world, actions repeat, characters come to full stops or float effortlessly in the background, set designs change as the camera sweeps back and forth across rooms, and scenes come and go out of linear sequence. The acting, featuring John Malkovich, Catherine Deneuve, Vincent Perez, Marcello Mazzarella, and Emmanuelle Beart, is as complex and fascinating as the rest of this stunning adaptation.

Sometimes They Come Back
$13.10 Super Savings
Add to Cart