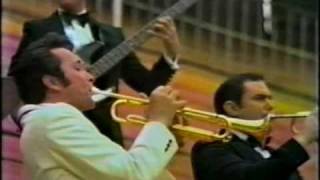 Personnel: Herb Alpert (vocals); Yvonne de la Vega (vocals, rap vocals).
Liner Note Author: Bob Garcia.
This late-'90s compilation of Herb Alpert provides a straightforward anthology of highlights from his three-plus-decade career, both with and without his ubiquitous Tijuana Brass. While the title sums up the contents, The Very Best of Herb Alpert (1999) does suffer from the odd omission and questionable entry -- which is all the more noticeable as the whole thing clocks in at under three-quarters of an hour. Alpert is as close to a true renaissance man as was possible in the latter half of the 20th century. In addition to racking up nearly two-dozen Top 40 hits, Alpert co-founded A&M Records alongside Jerry Moss, and became the label's chief producer, talent scout, arranger, and bandleader. Somewhere along the line he recorded over 30 albums and occasionally even toured. All of Alpert's early signature sides can be found here "The Lonely Bull (El Solo Toro)," "A Taste of Honey," "Zorba the Greek," "Tijuana Taxi," "What Now My Love," and "Spanish Flea" represent the 1962 -- mid-1966 era well. However, keen-eyed enthusiasts will note the conspicuous absence of the successful and popular singles "The Work Song," "Flamingo," and "Mame," all interestingly enough from the Top Ten S.R.O. (1966) long-player. The coverage begins to get even spottier, although who can argue with the selections that were deemed suitable for inclusion? "Casino Royale," and "This Guy's in Love with You" are anticipated. However, the representation of the criminally underrated and long out of print LPs Warm (1969) with a tasteful interpretation of Harry Nilsson's "Without Her," and all the more surprising, the hauntingly beautiful "Jerusalem" off of Summertime (1971). For Alpert followers, these tracks alone might serve the cost of admission. While "Rise," "Rotation," and "Diamonds" were all returns to former glories for Alpert and their place is rightfully deserved, the same can't be said for the Jimmy Jam collaborations "Keep Your Eye on Me" or the lightweight "Jump Street." Perhaps because The Very Best of Herb Alpert was initially introduced into the European market, the choice of material might seem debatable. ~ Lindsay Planer

Herb Alpert
Over the Rainbow
$13.60 CD Sale
Add to Cart