Animal-worship cultist Michael Conrad has trained his lions well, siccing the big cats on any fool who dares get in his way. But only when his unhappy wife runs off with his beloved chimps does Conrad unleash his inner beast. 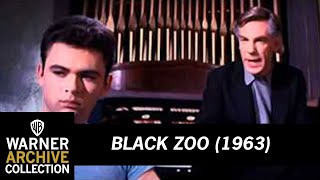 The most savage animal in a garden of beasts, animal-worship cultist and private zoo owner Michael Conrad (Michael Gough) has trained his lions well, siccing the big cats on any fool who dares get in his way. First it was a snoopy secretary, then a scheming realtor (Jerome Cowan). But only when his unhappy wife (Jeanne Cooper) runs off with his beloved chimps does Conrad unleash his inner beast, and the fur really flies.

Shot by Academy Award-winning cinematographer Floyd Crosby on a soundstage stocked by famed animal behaviorist and Marine World creator Ralph Helfer, Black Zoo is the third and final collaboration of Gough (who later played Alfred the butler in four Batman movies) and producer Herman Cohen (Horrors of the Black Museum and Konga), a furocious last trip to the maul.

This violent, gore-filled, effective horror tale by director Robert Gordon is about a totally wacko private zoo keeper, Michael Conrad (Michael Gough) whose literal worship of the animals he tends -- especially the cat species -- starkly contrasts with his cold-blooded disregard for human life. Conrad has a mute son Carl (Rod Lauren) with a simmering Oedipal hatred, and a wife who should have left him eons ago. Whenever Conrad gets miffed with anyone coming a little too close to his private affairs he simply feeds the hapless victim to the animals. It seems inevitable that if the animals do not get him, then the human species will.

Murder | Animals | Melodrama | Music | Revenge
This product is made-on-demand by the manufacturer using DVD-R recordable media. Almost all DVD players can play DVD-Rs (except for some older models made before 2000) - please consult your owner's manual for formats compatible with your player. These DVD-Rs may not play on all computers or DVD player/recorders. To address this, the manufacturer recommends viewing this product on a DVD player that does not have recording capability.

32%off
The Missouri Traveler
$6.80 Super Savings
Add to Cart