One woman - 25 pairs of shoes?!? It's impossible not to have fun with this all-time kitsch classic which, as fans know, is actually about a very big woman with a very bad attitude. 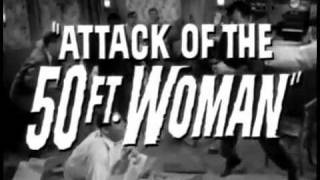 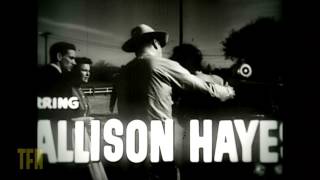 Joe Dante on ATTACK OF THE 50 FOOT WOMAN (Featurette)

One woman - 25 pairs of shoes?!? It's impossible not to have fun with this all-time kitsch classic which, as fans know, is actually about a very big woman with a very bad attitude. The woman is wealthy Nancy Archer (Allison Hayes), fresh from the loony bin and ticked off. Her rat of a husband (William Hudson) has been at play while the feline's away, putting the moves on Honey Parker (Yvette Vickers) and scheming about the day when Nancy's fortune will be theirs. That day will never come - not after Nancy has an alien encounter that zaps her metabolism into overdrive. Soon, Nancy's size matches her rage. She'll prove big girls don't cry; they get even.

The life of an affluent housewife is radically altered after she innocently comes across a group of aliens from outer space. The strange creatures cause the woman to grow to a height of 50 feet. This unintentionally funny film has become a camp classic.

After rays emitted from a monster from outer space attack a mentally ill woman, she grows 50 feet overnight. She is chained up in a large mansion, but escapes her captivity in order to murder her philandering husband.

16%off
The Incredible Shrinking Man
$8.40 Super Savings
Add to Cart