The Abominable Snowman of the Himalayas. Bigfoot of the Pacific Northwest. Few claim to have seen these links to our primitive past. But when a wild half-man/half-ape emerges from his cave, TV cameras observe the event -- and the terror! 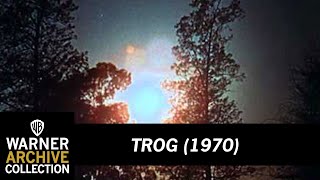 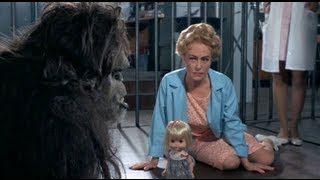 The Abominable Snowman of the Himalayas. Bigfoot of the Pacific Northwest. Few claim to have seen these links to our primitive past. But when a wild half-man/half-ape emerges from his countryside cave, TV cameras are there to observe the event - and the terror! People call him Trog, short for a prehistoric cave dweller called a troglodyte. To an anthropologist (Joan Crawford, in her final film), he's the scientific discovery of the age. To others, he's walking death. A grocer is impaled on a meat hook, a car is tossed aside like a twig, a child is kidnapped -- all after local resident Sam Murdock (Michael Gough) prods the brute into a blind rampage. In true horror tradition, the world's Murdocks leave no doubt who the real savages are -- and who is the part-man, part-monster, all Trog!

Joan Crawford's last film sadly has her cast as an anthropologist who discovers a living missing link in this low-budget British-made horror film.

A troglodyte, or primitive man, is found in a cave and brought to the lab of Dr. Brockton. Brockton, believing that the creature could be the "missing link," studies and attempts to communicate with it. Meanwhile, the townspeople are angry with Brockton, for they feel that the trog is nothing more than a dangerous monster. Unfortunately, the residents are proven correct when the caveman is freed from his cage -- and embarks on a murderous rampage...

I Saw What You Did
$9.10 Super Savings
Add to Cart

Queen of Blood
$19
Add to Cart