Save the world. Get the girl. Pass math.

Currently Out of Stock: We'll get more as soon as possible
Notify Me When Available
Add to Wishlist
Format:  Blu-ray
item number:  6AFQV
Different formats available:
Agent Cody Banks (DVD) for $6.40
Our customers love us! 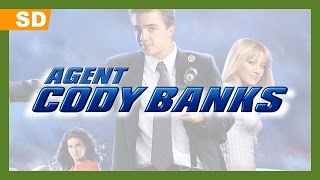 James Bond. Matt Helm. Cody Banks. Super spies all ... with one exception: Cody Banks (Frankie Muniz, TV s Malcolm in the Middle) is a 15-year-old CIA operative who has to make sure his chores are done before saving the world.

When Natalie Connors (Hilary Duff, Cheaper by the Dozen), Cody s high school crush and the daughter of the eminent scientist, is used as leverage to force her reluctant father to aid Dr. Brinkman in his plans, Cody springs into action. The spy game will never be quite the same in the action comedy Agent Cody Banks.

Spy Kids: All the Time in the World
$8.70 Super Savings
Add to Cart