An elderly Chinese man routs evil in a Western frontier town by setting up his circus for the townspeople. The various performers affect each of the circus' visitors in a different way. 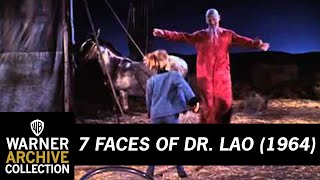 An elderly Chinese man routs evil in a Western frontier town by setting up his circus for the townspeople. The various performers affect each of the circus' visitors in a different way, and in the end the unscrupulous citizen who dominates the town repents.

In one of the finest performances of his career, Tony Randall plays the part of a mysterious Chinese doctor named Lao who rides into a small western town with his circus and changes the lives of all who come to see it. Lao assumes many disguises, some so extraordinary that Mr. Randall is completely unrecognizable.

A mysterious travelling circus, led by the odd Dr. Lao, arrives in a small dusty town. Dr. Lao is endowed with magical powers, and his troupe is populated with such mythical characters as Merlin, Pan, Medusa and even the Abominable Snowman. Together, Lao and his performers use their unique abilities to help the townspeople gain clearer outlooks on who they are -- and in the process change their lives forever.

31%off
Abe Lincoln In Illinois
$8.98 BLACK FRIDAY
Add to Cart

Fantastic Beasts: The Crimes of Grindelwald (2-DVD)
$14.50
Add to Cart

The Brass Bottle
$10
Add to Cart

Customer Rating:
Based on 8265 ratings.

31%off
Captain Nemo and the Underwater City (DVD-R)
$8.98 BLACK FRIDAY
Add to Cart