A small-time British gangster returns to his hometown to search for the truth behind his brother's death. 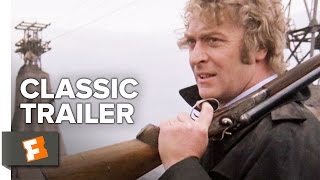 When Jack Carter comes to Newcastle to inquire about his brother's mysterious death, racketeers think they can threaten him, rough him up, shoo him away like a fly. Which shows they don't know jack about Carter.

Academy Award-winner Michael Caine plays the relentless title character in this gritty neo-noir. Caine's Carter is a sharp portrait of cold-blooded precision as he connects the dots of a cover-up that leads to a pornography ring (John Osborne plays the flesh peddler's ringleader). Revenge is sweet for Carter. But in the hard world of latter-day film noir, sweet is sure to turn suddenly, violently sour.

A small-time street tough from London finds himself enmeshed in a web of deceit, blackmail, and murder when he investigates the circumstances surrounding the death of his brother in Newcastle. GET CARTER is a hard-as-nails British crime movie, featuring a brutal performance by Michael Caine that stands as one of his best. The film is based on the novel JACK'S RETURN HOME by Ted Lewis. It was remade for a blaxploitation audience a year later as HIT MAN, and in 2000 Sylvester Stallone starred in a remake, with Michael Caine making an appearance in the film as well.

Action | British | Organized Crime | Suspense | Thriller | Betrayal | Murder | Deception | Blackmail | Recommended | Theatrical Release | Crime
This product is made-on-demand by the manufacturer using DVD-R recordable media. Almost all DVD players can play DVD-Rs (except for some older models made before 2000) - please consult your owner's manual for formats compatible with your player. These DVD-Rs may not play on all computers or DVD player/recorders. To address this, the manufacturer recommends viewing this product on a DVD player that does not have recording capability.

The Ipcress File
$19
Add to Cart

The Boondock Saints
$6.60
Add to Cart