Harry Garmes (George C. Scott) is hired to drive a young killer from Spain to France. But no one told him about the extra passenger, the girl or the seven men trying to kill them all. 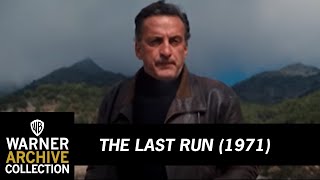 George C. Scott and Trish Van Devere (Scott's future wife) costar in this gritty crime drama directed by Richard Fleisher (who replaced original director John Huston). Scott plays Harry Garmes, a former getaway driver who has retired to a peaceful life in a rural southern Portugal fishing village. Garmes is asked to pull off one last gig; he must drive a young killer (Tony Musante) and his girlfriend (Van Devere) across the border to France. What follows is a lean, full-of-attitude thriller where no one can be trusted, fueled by Scott's hard as nails performance and striking cinematography by Sven Nykvist.

George C. Scott stars in THE LAST RUN as an aging mob driver hoping to make one last big haul and retire. Harry Garmes (Scott) is persuaded by his old cronies to drive escaped criminal Paul Ricard (Tony Musante) and his girlfriend, Claudio Schemer (Trish VanDevere), across Spain to safety. Garmes has premonitions throughout the flight of his own demise, but his fate will not be known until the end of his journey. John Huston was supposed to direct, but was replaced after a series of confrontations with Richard Fleischer.The cast includes Scott's then-wife, Colleen Dewhurst, alongside his wife-to-be, Trish VanDevere.

Crime | Spain
This product is made-on-demand by the manufacturer using DVD-R recordable media. Almost all DVD players can play DVD-Rs (except for some older models made before 2000) - please consult your owner's manual for formats compatible with your player. These DVD-Rs may not play on all computers or DVD player/recorders. To address this, the manufacturer recommends viewing this product on a DVD player that does not have recording capability.