He Battled Two Empires For The Love Of One Woman. 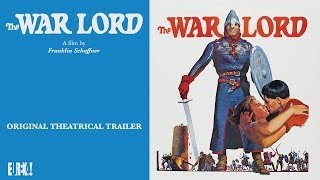 "[We] planned [the film] as a simple love story, contrasted with an examination of witchcraft rituals of the Middle Ages. But Universal saw it differently
- as a minor league 'El Cid.'
"Most of the witchcraft material wound up on the cutting room floor... with the studio insisting on the climactic siege to be built up..." Charlton Heston.

Chrysagon, an 11th century Norman Knight and war lord, is given command of a Druid peasant village. Battling enemies from both the north and from his own ranks, he falls in love with Bronwyn, engaged to the son of the tribe's chieftain. This sets the stage for betrayal, bloody battles, murder and forbidden love as Chrysagon and Bronwyn vow never to part.

The War Lord Chrysagon, a Norman knight defending shoreline settlements against Frisian raiders, decides to take the "right of first night" with a beautiful peasant woman. He falls in love with the wench and she in turn chooses to stay with the knight. But her husband, enraged by her decision, joins the forces of Draco, Chrysagon's traitorous brother who is plotting to usurp the War Lord's authority in the region. Together with Frisian warriors Draco attacks and lays siege to the village.