Start the Revolution Without Me PG

Gene Wilder and Donald Sutherland star as two sets of twins mixed up at birth -- one raised as an aristocrat, and the other as a peasant. 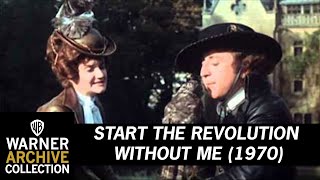 Start the Revolution Without Me (Original Theatrical Trailer)

Produced and directed by comedy veteran Bud Yorkin, Start the Revolution Without Me broke ground for a comedy revolution. It takes the tumultuous "let them eat cake" days of the French Revolution and gives everyone a figurative pie in the face. Two sets of twins are mismatched at birth so that years later, each set will have one Gene Wilder and one Donald Sutherland. One set grows up to be aristocratic swashbucklers; the other set are peasants. In a hilarious fluke of fate, they crisscross across classes.

Two sets of mismatched twins--one pair ruling class and the other peasant--unexpectedly cross paths during the height of the French Revolution. A charming farce in the tradition of the great costume films of the 30's and 40's.

Gene Wilder and Donald Sutherland join comedic forces in this satirical farce set during the French Revolution.
A pair of commoner brothers are confused for a royal set of twins, whom they perfectly resemble. The first, raggedy duo finds itself ordered to aid King Louis XVI in his attempts to curb the shenanigans of Marie Antoinette and Duke d'Escargot.
This mistaken-identity crisis is but one link in a long chain of whimsical adventures and derring-do.

The Last Remake of Beau Geste
$19
Add to Cart

19%off
A Funny Thing Happened on the Way to the Forum
$16.20 Super Savings
Add to Cart