Get email alerts for Angus & Julia Stone
Currently Out of Stock: We'll get more as soon as possible
Notify Me When Available
Add to Wishlist
Format:  CD
sku:  6K9SF
Our customers love us! 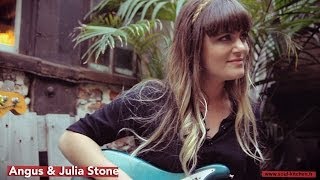 Australian sibling folk-rock duo Angus & Julia Stone broke big with their 2010 sophomore album, Down the Way. The album, which debuted at number one in Australia, took home five ARIA music awards, including Album of the Year. On the heels of their success, the famously shy duo began work on a follow-up, but eventually shelved the idea in favor of taking some time off to pursue solo work. However, coaxed back into the studio by super-producer Rick Rubin, the Stone siblings eventually returned to their ruminative, melodic, and often melancholy collaborations with 2014's Angus & Julia Stone. In many ways, what you see is pretty much what you get from the Stones, with their shaggy hair and hippie-chic clothes matching their penchant for acoustic introspection. Indeed, there aren't too many surprises here, with the siblings sticking to their formula: intimate, folky songs with poignant lyrics that usually bend toward the darker, sadder aspects of life. What commands your attention, however, is the way that Julia's cherubic, sandpaper doll of a voice contrasts with Angus' more clear-toned and casual vocal style. They also display a knack for coming up with lyrics that contain bittersweet, poetic juxtapositions, always hinting at deeper, more complex emotions. On "Other Things," duetting in clipped unison phrases, they sing "Go put the cat outside/'Cos we've got things to do," and "There's a plane in the sky/If those people fall they will die/I've got other things on my mind." It's this kind of focus on the ennui, the mundane tragedy that permeates many people's daily lives, that works as creative fodder for Angus & Julia Stone. Ultimately, it's that ennui, combined with the pair's heartbreaking sense of melody, that makes this album a delightfully sad yet engaging listen. ~ Matt Collar