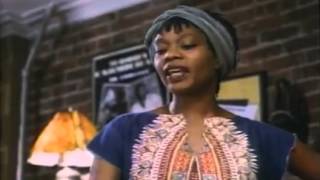 With CROOKLYN, Spike Lee revisits through the eyes of a young girl the Brooklyn of his youth, resulting in an innocent, touching comedy about one summer in the life of a large family. The only sister in a family full of boys, Troy Carmichael (Zelda Harris) has to be strong, smart and quick with her fists if necessary. Although they argue more than they talk, the Carmichaels draw from a deep well of love for one another. Over the course of the summer, Troy weathers her parents' separation and reconciliation (characters played with deep sincerity by Alfre Woodard and Delroy Lindo), takes a wild visit to her cousin's in Virginia, and must learn to cope with personal tragedy when it strikes. Lee co-scripted the film with siblings Joie and Cinque--who claim that it isn't strictly autobiographical--yet CROOKLYN rings true with a nostalgia and detail that makes it feel like a home movie. Flexing his technical skills, Lee shot all of the Virginia scenes with a distorted lens to reflect Troy's confusion with her new surroundings. Featuring an onslaught of 1970s pop culture references and a seemingly endless pop music soundtrack, CROOKLYN yet remains a universal viewing experience.

A slice African-American urban life in early 1970s, CROOKLYN focuses on the good- humored Carmichael family whose center of gravity is their mother (Alfre Woodard), a hard-working schoolteacher. Around her are one dependable daughter (Zelda Harris) four obnoxious younger sons and a stubborn jazz musician husband (Delroy Lindo) who refuses to let go of his dreams. Seeped in 1970s nostalgia, this film highlights the events, large and small, that dot one girl's journey from childhood to womanhood.