Currently Out of Stock: We'll get more as soon as possible
Notify Me When Available
Add to Wishlist
Format:  DVD
sku:  YEEE
Related products:
Unscripted for $3.18
Unscripted (2-DVD) for $23.98
Our customers love us! 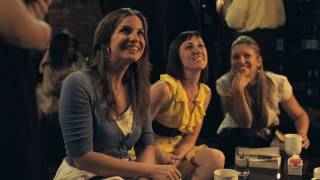 THE GOOD GUY - Official US Theatrical Trailer in HD

New York Times - 02/19/2010
"[I]t is fresh enough to provide the voyeuristic kick of glimpsing the frenzied lifestyle of aspiring masters of the universe at a time when unlimited greed was rewarded with unlimited opportunity."
Variety - 02/17/2010
"THE GOOD GUY boasts a novel plot structure....DePietro's willingness to make his characters unlikable is to admired."
Los Angeles Times - 02/19/2010
"[A] more-clever-than-most window into modern yuppie mating rituals, tracking just how tough it is to keep a grip on love and the corporate ladder at the same time."
Box Office - 02/19/2010
3 stars out of 5 -- "The cast could not be better. Bledel is believable as a young professional caught in the crossroads of career and choices in love and life."
Chicago Sun-Times - 03/03/2010
3 stars out of 4 -- "[The film] actually it has a nice feel to it. It looks carefully at a lifestyle many people might thoughtlessly envy."

After executive producing the acclaimed documentary MANDA BALA and the J.M. Coetzee adaptation DISGRACE, Julio DePietro makes his feature debut as a writer-director with THE GOOD GUY, a drama about ambitious young Wall Streeters fighting each other -- and sometimes their own decent nature -- to get ahead in the world. Our narrator, Tommy (Scott Porter of TV's FRIDAY NIGHT LIGHTS), is young, clever, charming, and attractive. He's got a smart, pretty girlfriend, Beth (Alexis Bledel of GILMORE GIRLS), an urban conservationist. He's also very good at his investment broker job, impressing his ruthless, cynical boss, Cash (erstwhile "Brat Pack" member Andrew McCarthy). When a key member of Tommy's sales team suddenly leaves for a competitor, Tommy needs to fill his spot quickly, and takes a chance on the bumbling Daniel (Bryan Greenberg, BRIDE WARS), a former Marine and computer geek who seems a bit naïve about high finance and a bit nervous around women. Tommy takes Daniel under his wing, showing him how to dress, where to socialize, and how to charm attractive women. Their relationship is threatened when Daniel begins spending more time with Beth, joining her book club, and becoming her confidant. Tommy begins to question his decision to share his wisdom with Daniel, while Daniel is forced to decide what success really means to him, and where his loyalties lie. THE GOOD GUY also stars Anna Chlumsky (IN THE LOOP) and Aaron Yoo (DISTURBIA). The film had its world premiere at the 2009 Tribeca Film Festival.