The Light at the Edge of the World (Blu-ray) PG

Jules Verne Takes You Over the Edge of the World! 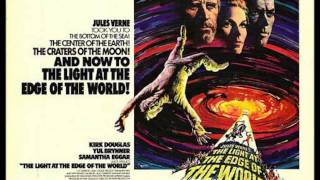 Light At The Edge of the World Radio Ad (Featurette)

Three men guarding an isolated lighthouse located at the tip of South America are attacked by a ship full of bloodthirsty pirates. Based on a novel by Jules Verne, director Kevin Billington has delivers a tight, engaging story anchored by strong performances from Kirk Douglas and Yul Brynner.

Based on Jules Verne's gripping adventure novel, "Light at the Edge of the World" tells a dramatic story of courage and survival against all odds.
After disembarking at Cape Horn, vicious pirate Captain Kongre immediately kills lighthouse keeper Captain Moriz, and sends Denton, Moriz's assistant fleeing for his life. But soon Denton realizes that he must return and fight Captain Kongre for the villain has erected a false lighthouse in order to lure unsuspecting ships into his murderous clutches.

I Spit on Your Grave: Vengeance Is Mine
$12.80 Super Savings
Add to Cart