Entertainment Weekly: "..Mercury's reverence for [Caballe] and his flair for kitsch make this a novelty item too cracked to resist.." - Rating: B 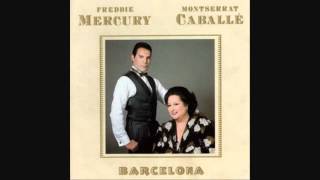 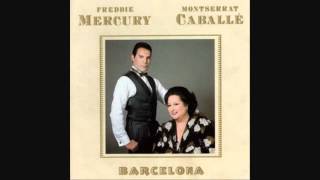 Entertainment Weekly - 8/7/92, p.60
"..Mercury's reverence for [Caballe] and his flair for kitsch make this a novelty item too cracked to resist.." - Rating: B
Stereo Review (12/92, p.100) - "..a unique souvenir of Mercury, and its posthumous release is a touching way of saying 'Vaya con Dios' to a uniquely gifted rock showman.."

This is a collection of Spanish and American songs by Queen's lead singer Freddie Mercury and opera singer Montserrat Caballe.
Personnel: Freddie Mercury, Montserrat Caballe (vocals); Homi Kanga, Laurie Lewis (violin); Deborah Ann Johnson (cello); Barry Castle (horn); Mike Moran (keyboards); John Deacon (bass); Frank Ricoffi (percussion); Madeline Bell, Debbie Bishop, Lance Ellington, Miriam Stockely, Peter Straker, Mark Williamson, Carol Woods (background vocals).
Recorded at The Townhouse Studios, London, England and Mountain Studios, Montreux, Switzerland.
Personnel: Montserrat Caball‚ (vocals); Freddie Mercury (vocals, piano, background vocals); Homi Kanga, Laurie Lewis (violin); Deborah Ann Johnston (cello); Barry Castle (horns); Mike Moran (keyboards); John Deacon (bass guitar); Frank Ricotti (percussion); Peter Straker, Debbie Bishop, Lance Ellington, Madeline Bell, Mark Williamson, Miriam Stockley, Carol Woods (background vocals).
Recording information: Mountain Studios, Montreux, Switzerland; Townhouse Studios, London, England.
Photographers: Terry O'Neill ; Peter Hince.
Arrangers: Mike Moran ; Freddie Mercury.
With Barcelona, Queen singer Freddie Mercury realized his long-lived dream of performing with an opera singer; in this case, Montserrat Caballe. While it's certainly a treat for any fan of Mercury's to hear this album, it's a difficult record to recommend. Most fans of opera will probably find it far too simplistic and pop-based, while many rock fans are sure to find the record too classical. The first half of the album, however, is deserving of a spin for any open-minded listener. Consisting of semi-operatic melodies with grand production, songs like "Barcelona" and the Eastern-sounding "La Japonaise" are startling in their beauty; the two singers from opposite ends of the music spectrum working surprisingly well off each other. The most classically operatic pieces of the project, "Ensueno" and "The Fallen Priest," are alternately gorgeous and powerfully dramatic. Unfortunately, the second half of the album is less successful as it reverses the formula of the first half. While Mercury can do well in semi-operatic settings, Caballe sounds awkward on the more pop-oriented tracks "Guide Me Home" and "How Can I Go On." "The Golden Boy," largely a gospel track with a full choir, is well-written and performed by Mercury, but Caballe's voice is simply not suited for the genre and the operatic opening sounds jarring against the gospel midsection. Nonetheless, despite its weaknesses, the record contains some beautiful and passionate music that is unlike anything most fans of rock and pop are likely to have heard before. For that alone it should be commended. ~ Geoff Orens