NME (Magazine): Ranked #98 in NME's list of the `Greatest Albums Of All Time.' 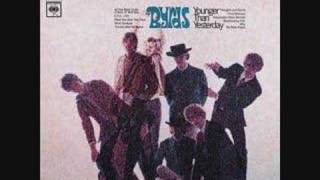 Byrds - Have You Seen Her Face (Music Video)

It Happens Each Day (Music Video)

The 1996 reissue of YOUNGER THAN YESTERDAY includes six bonus tracks: "It Happens Each Day," "Don't Make Waves," "Lady Friend," "Old John Robertson" (the B-side of the "Lady Friend" single), and alternate versions of "My Back Pages" and "Mind Gardens."
The Byrds: David Crosby (vocals, guitar); Jim McGuinn (vocals, 12-string guitar); Chris Hillman (vocals, bass); Michael Clarke (drums).
Additional personnel: Vern Gosdin (acoustic guitar); Clarence White (electric guitar); Hugh Masekela (horns).
Reissue producer: Bob Irwin.
Recorded in 1966-67. Includes liner notes by David Fricke and Johnny Rogan.
Digitally remastered using 20-Bit Super Mapping system.
Released in April 1967, months before the Summer Of Love, YOUNGER THAN YESTERDAY was proof that The Byrds had already graduated from their fascination with the psychedelic "scene." "Eight Miles High" may have introduced the general public to the counter culture's interests and fascinations, but this song cycle found The Byrds reluctant to rest their faith in either the growing movement they helped bring together, or the art form that was the movement's voice.
The sonic lessons they'd learned still infused many of the tracks. Tape-loops created the splendorous backdrop of "Mind Gardens," the Eastern modes used on "Eight Miles High" reappeared on the re-recorded "Why," and "C.T.A.-102" seemed less a song than an excuse to use the studio as a laboratory for new sounds. But a new direction was emerging. "So You Want To Be A Rock 'N' Roll Star," a tongue-in-cheek treatise on fame, and Bob Dylan's "My Back Pages," the best known tracks here, both hinted at a reevaluation of previously settled matters. David Crosby's folky, Eastern-tinged "Everybody's Been Burned" may have been written well before he joined the group, but it is a dark declaration on moderation, trust and responsibility, that comfortably fits within the context of the era. And Chris Hillman's country-minded contributions not only grounded The Byrds with a salt-of-the-earth feel missing from the rest of the album, but hinted at the Nashville sound where they and many of their psychedelic brethren would soon end up. Now, as then, YOUNGER THAN YESTERDAY seems like the precursor to a generation's truer awakening.

85%off
Silence Is Golden 2: Hits from Original Chilled
$4.98 CD Sale
Add to Cart