History is made by those who break the rules. 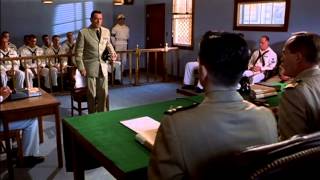 "If [the navy divers]'s lucky, he dies young two hundred feet beneath the waves. Because that's the closest he will ever get to becoming a hero."
- Billy Sunday (Robert De Niro) to diving trainees
"Some things just don't mix, do they'"
- Mister Pappy (Hal Holbrook) to Billy Sunday
"Why do you want this so badly'"--Jo (Aunjanue Ellis)
"Because they said I couldn't have it."
- Carl Brashear (Cuba Gooding Jr.)
"Since when does deserving mean anything'"
- Billy Sunday to Carl Brashear

An heroic life gets a suitably dramatic retelling in George Tillman, Jr.'s docudrama MEN OF HONOR, based on the true story of Carl Brashear, the first African American to become a United States Navy master diver. The film employs the conventional yet pleasurable against-all-odds narrative. Carl Brashear (played with noble grace by Cuba Gooding Jr.) is the son of a degraded Southern sharecropper. Determined to succeed in the vocation he believes he was born for, Brashear enlists in the navy. Once there, however, the determined young man finds his dream inaccessible--thwarted by the forces of institutional and personal racism. When, after a long and difficult struggle, he is finally allowed into diving school, he finds himself under the authority of Billy Sunday (Robert De Niro), a former master diver whose injured lung has left him permanently above water. Sunday becomes simultaneously Brashear's most vicious adversary and most loyal supporter, motivating him to succeed. The story that follows is a highly emotional wave of ups and downs: Brashear overcomes one barrier only to be met by the next, even larger one. MEN OF HONOR is at times heartbreaking and painful to watch, but the triumphant ending makes for a deeply satisfying payoff.