Major Robert Rogers, leader of the celebrated Rogers' Rangers fighting force, takes on one of the most challenging expeditions in military history. 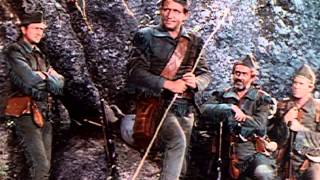 Spencer Tracy and a stellar supporting cast grab muskets, gun powder and knives, and head out for adventure in Northwest Passage, a lavish Technicolor retelling of French and Indian War heroics. Based on Kenneth Robert's best-seller, Tracy plays true-life explorer Major Robert Rogers, the intrepid leader of the celebrated Rogers' Rangers fighting force that took on one of the most challenging expeditions in military history.

Based on Kenneth Roberts's 1937 novel, this rousing tribute to Rogers' Rangers, a guerrilla unit attached to the British army during the French and Indian War, stars Spencer Tracy as the tough-minded Robert Rogers. When rebellious artist Langdon Towne (Robert Young) needs to leave his native New Hampshire after nearly being jailed for libeling the provincial governor, he accepts Rogers's offer to join his company as they seek a northwestern route to the Pacific. Along with his friend Hunk Marriner (Walter Brennan), he soon finds the arduous journey more demanding than expected but is driven forward by the iron will of Rogers. Taking revenge for a spate of recent Indian massacres, the Rangers execute a sneak attack on an Abenaki village, wiping out its inhabitants and burning it to the ground, leaving a powerful impression on the young artist. They head for an assignation with the British at Fort Wentworth, believing that they'll be able to restock their sadly depleted supplies, but find the fort completely empty on arrival. The reliably excellent Tracy leads a fine supporting cast in a film that is surprisingly gritty in its portrayal of his company's travails. Vidor's exhaustive research into the period paid off in settings that have the feel of absolute authenticity.

Real-life pioneer Major Robert Rogers led Rogers' Rangers on missions to open up new territory in colonial America. Along the way a couple of greenhorns come of age through the hardships and frustrations under the stoic taskmaster.