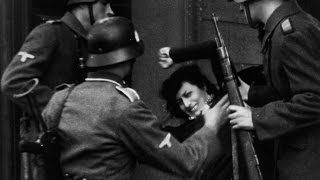 Beginning with the sound of a gun being fired, PAISAN, Roberto Rossellini's excellent treatment of WW II Italy, is divided into six vignettes about life in the war and its consequences for people all over Italy. Using an English-language narrator, but including English, Italian, and German dialogue, the film is a tricky masterpiece of filming and storytelling, cowritten by Rossellini and Federico Fellini. The movie illustrates the way that war brought people together and made them understand each other in different ways--overcoming barriers of nationality, cultural and class difference, language, religion, and gender. Each of PAISAN's vignettes is captivating and enlightening while examining serious, sometimes harrowing, and often murderous war situations. In the first, an American soldier and a young Italian girl spend the night guarding the American barracks in the ruins of a castle by the sea, until they are attacked by German troops. In another vignette, an African American officer befriends a peasant boy, only to find himself unable to cope with the boy's poverty. In Rome, an Italian girl waits in the rain for an American soldier who promised to come for her at the beginning of the war; and, in one of the most brilliant and truly funny sequences in Italian film history, three American soldiers--one Protestant, one Jew, and one Catholic--share a religious visit with the monks of a conservative Italian monastery.

PAISAN, one of Roberto Rossellini's most creative works, is a compilation of six vignettes about the Allied liberation of Italy during World War II. Cowritten by Federico Fellini, the film combines a comic cultural commentary on Italians, Americans, and Germans, as each is represented in his own language, while giving a colorful interpretation of the different situations--love affairs, loss of family members, religious renewal, and adventure--happening as a side bar to the fighting in WW II.

The Gospel According to St. Matthew
$10.90
Add to Cart