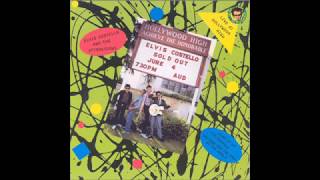 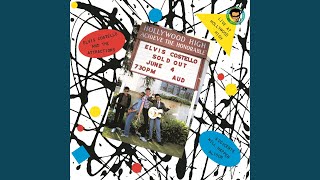 Paste (magazine) (p.67) - "The resulting album careens from great song to great song, most derived from Costello's first two classics MY AIM IS TRUE and THIS YEAR'S MODEL..."

Personnel: Elvis Costello (vocals, guitar); Steve Nieve (keyboards); Pete Thomas (drums).
Recording information: Hollywood High, Hollywood, CA (06/04/1978).
Originally released as a four-song bonus EP with the U.K. edition of Armed Forces, then excerpted with an additional six songs on Rhino's double-disc expansion of said album in 2002, Live at Hollywood High received a full-blown reissue in 2010, almost 32 years after the June 4, 1978 concert from Elvis Costello & the Attractions. As the second installment of the Costello Show archival series, Live at Hollywood High isn't as legendary as Live at the El Mocambo, which had the benefit of once being one of Elvis Costello's rarest records, but it's a better show, or at least a better indication of the Attractions at their absolute peak. Apart from the dramatic opening reading of "Accidents Will Happen," featuring only Elvis and pianist Steve Nieve, every performance here is significantly revved up from the album versions, a change evident on all the My Aim Is True material -- including a reworked arrangement of "Stranger in the House" stripped of its country influence -- and the entire set has the momentum of a locomotive, twitchily pausing at "Alison" before crashing to a conclusion with a tremendous sequence of "You Belong to Me," "Radio, Radio," "Pump It Up," "Waiting for the End of the World," and "Miracle Man." Moreso than This Year's Model, this is the purest rock & roll record in Costello's catalog: there's passion and abandon in the Attractions' noisy revelry, not to mention some seriously heated fun. ~ Stephen Thomas Erlewine