Kansas City, 1934. Anything could happen here. One night it did.

6.2K ratings
Currently Out of Stock: We'll get more as soon as possible
Notify Me When Available
Add to Wishlist
Format:  Blu-ray
sku:  72H8G
Our customers love us! 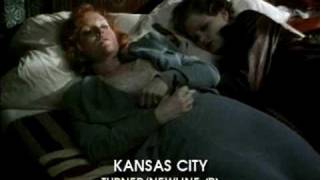 Robert Altman's hometown gets the director's signature treatment in this jazz-infused mobster tale set in the 1930s. KANSAS CITY takes place in the jazz-drenched, depression-era milieu of the eponymous city, focusing on a 24-hour relationship between two extremely different women. Trashy, brassy and uneducated Blondie O'Hara (Jennifer Jason Leigh) is desperately searching for her equally lowlife husband Jack (Dermot Mulroney) who has been captured by the vicious Seldom Seen (Harry Belafonte) after attempting to rob one of his casino's greatest losers. In a move typical of her off-kilter personality, Blondie kidnaps Carolyn Stilton (Miranda Richardson), a rich, unhappy, drug-using socialite, and drags her around town as she searches for Jack. The experience these disparate women endure provides insight into themes Altman often explores in his films, including class differences, and the hypocrisy and delusion he finds extant in American culture. As in Altman's prior films--notably NASHVILLE and SHORT CUTS--he includes a terrific musical backdrop to add depth to the story. Assembling a who's who of modern jazz greats, KANSAS CITY captures perhaps some of the most invigorating musical performances that have been committed to celluloid, including an unforgettable tenor saxophone duel between James Carter and Joshua Redman.

Robert Altman's hometown gets the director's signature treatment--exploring themes such as class differences, and the hypocrisy and delusion he finds extant in American culture--in this jazz-infused mobster tale set in the 1930s. When a small-time gangster crosses the town's mob kingpin and subsequently gets taken prisoner, his movie-mad wife kidnaps a drug-addled society woman in hopes of forcing a captive swap. Contemporary jazz musicians provide the evocative score in this atmospheric period piece.

The Disappearance of Alice Creed
$7.69 Spring Sale
Add to Cart