The story of that man and his 76 trombones, and the wonderful, wonderful tune he played on every heart in town! 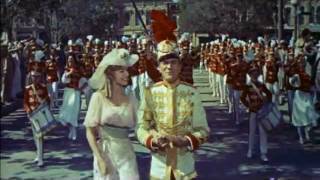 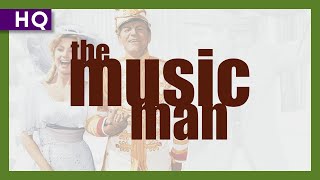 An energetic con artist convinces the citizens of a small turn-of-the-century community to form a boy's band - which he plans to lead. This classic Hollywood musical features such hits as "76 Trombones," "Ya Got Trouble," and many more. Academy Award Nominations: 6, including Best Picture. Academy Awards: Best Adapted Score.

Professor Harold Hill, a travelling salesman, makes his living by duping small towns into buying instruments and uniforms for a boys' marching band. Hill sells parents on the idea by promising to teach the boys how to play, but as soon as they hand over their money, he skips out. His latest stop is River City, Iowa, where he soon has the locals up in arms over the threat to public morals posed by the neighborhood pool hall; how better to save their sons' souls than by creating a boys' band' Only one thing stands between Hill and success: the town's pretty but skeptical librarian, who threatens to expose his schemes -- if she doesn't declare her love for him first.

Fiddler on the Roof
$12.60 Super Savings
Add to Cart

The Wizard of Oz (DVD)
$15 Super Savings
Add to Cart