A rising opera star's life is as turbulent as the on-stage roles he plays in this emotion-swept musical drama based on a James M. Cain novel. 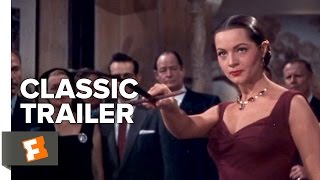 A rising opera star's life is as turbulent as the on-stage roles he plays in this emotion-swept musical drama based on a James M. Cain novel and filmed almost entirely in Mexico. As the young vocalist who emerges from the obscurity of the vineyards, Mario Lanza impressively hoists the lead role onto his wide shoulders. In a dazzlingly display of the power that made him a sensation of the musical screen, the renowned tenor sings Ave Maria, excerpts from La Boheme, Don Giovanni, Otello and Il Trovatore, plus other selections from a long songlist.

Loosely based on a novel by James M. Cain, this romantic drama centers on the struggles of a humble vineyard worker (real-life opera star Mario Lanza) who rises to become a renowned opera star. In the original book, Damon, the protagonist, has a homosexual relationship with the patron who boosts his career, but in the film, the patron is a wealthy and manipulative young woman named Kendall (Joan Fontaine). As charming as she is selfish, poor Damon cannot help but fall in love with Kendall. Unfortunately, she is a fickle creature and soon grows bored with him, thereby breaking his heart and causing him to choke during his audition for the Met. Afterward, he flees to Mexico. There he comes down with a mysterious, debilitating movie disease. Fortunately, Juana, a beautiful ex-bullfighter's daughter is there to help him recover. Damon falls in love with her, but just as it looks like happiness will finally be his, conniving Kendall reappears. In addition to singing numerous selections from popular operas, Lanza also sings a pair of Sammy Cahn/Nicholas Brodszky pop tunes: "Serenade" and "My Destiny."

Romance | Love Triangle | Rags To Riches | Health | Music | Operas | Mexico | Love Triangles | Romances | Musicians | Love | Concerts | Diseases
This product is made-on-demand by the manufacturer using DVD-R recordable media. Almost all DVD players can play DVD-Rs (except for some older models made before 2000) - please consult your owner's manual for formats compatible with your player. These DVD-Rs may not play on all computers or DVD player/recorders. To address this, the manufacturer recommends viewing this product on a DVD player that does not have recording capability.