Beyond fantasy. Beyond obsession. Beyond time itself... he will find her. 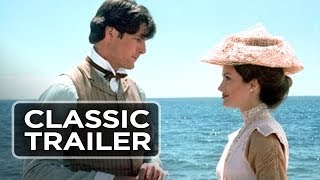 Somewhere in Time is the story of a young writer who sacrifices his life in the present to find happiness in the past, where true love awaits him. Young Richard Collier (Christopher Reeve) is approached by an elderly woman who gives him an antique gold watch and who pleads with him to return in time with her. Years later, Richard Collier is overwhelmed by a photograph of a beautiful young woman (Jane Seymour). Another picture of this woman who had in her later years reveals to him that she is the same woman who had given him the gold watch. Collier then becomes obsessed with returning to 1912 and the beautiful young woman who awaits him there.

A young writer (Christopher Reeve) is mystified by the old portrait of a beautiful stage actress (Jane Seymour) from the turn of the century. He uses his mind through self-hynosis to turn back the years to the misty distant past, and find the woman who has him spellbound. Soon they are in love, and the time difference is only one of the problems to overcome. Scored by composer John Barry (of James Bond fame).

"Come back to me." These were the strange words uttered by aged actress Elise McKenna to playwright Richard Collier, and they have haunted him ever since. When he hears that Elise has died, an irresistible impulse leads him to travel to the historic hotel where she lived. There he discovers an old photograph of Elise and realizes, to his amazement, that in another life he was once her lover.
Richard wills himself into the past and meets Elise again, now young and beautiful and acclaimed. Their romance blossoms anew, but not even true love can defeat the power of time...

Customer Rating:
Based on 62688 ratings.


In our dreams, we think of that ONE special person to fufill our hopes of love and happiness but, sadly, they are only dreams. This movie gives us a glimpse of what, and how strong, true love can be. One person on a quest of the heart, another innocent and unknowing, thrust together by...chance, happenstance, fate? No... brought together by, and sustained by, the power of true love.
This story may be a fairytale, but the love it represents is not. This love and longing is in us all and this movie shows us our own heart.