Revolution is the only lawful, equal, effectual war. It was in Russia that this war was declared and begun. 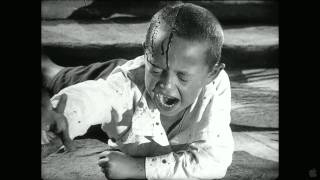 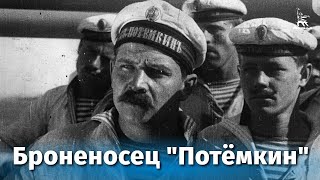 Sergei Eisenstein's film of the famed Odessa revolt has been one of the landmarks of cinema since its release. Commissioned by the government to commemorate the failed uprising of 1905, it's without stars or even actors in the usual sense, exemplifying the collectivism it celebrates. The Battleship Potemkin has just returned from the war with Japan, its crew near mutiny because of brutal treatment and bad rations. When they're served maggot-infested meat one morning, the sailors finally rebel. One of the sailors, Vakulinchuk (Aleksandr Antonov), dissuades the officers from firing upon the mutineers, and they join the rest of the crew in revolt. Hearing of the mutiny, the people of Odessa send supplies to express their solidarity with the crew and gather en masse to mourn a slain sailor. The czar's troops arrive to dispel the crowd. In perhaps the most famous sequence in film history, the director rhymically intercuts shots of the troops marching machinelike down the Odessa steps with shots of innocent citizens being killed and wounded, in a brilliant embodiment of the director's theories of montage. Aside from CITIZEN KANE, perhaps the most perfectly constructed film ever made, the film's vision of tyranny and rebellion remain as powerful today as it was in 1925.

This film classic about the 1905 Russian Revolution dramatizes the mutiny of the sailors of the Battleship Potemkin and the subsequent massacre of the innocent civilians who sympathized with them. The silent film features a musical soundtrack by Edmund Meisel. Eisenstein's innovative editing techniques in this masterpiece have influenced directors from mainstream Hollywood to the avant-garde.

The Man With a Movie Camera
$19
Add to Cart