IT'S FUN TO BE SCARED BY 13 GHOSTS 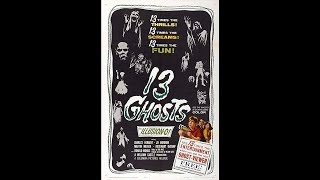 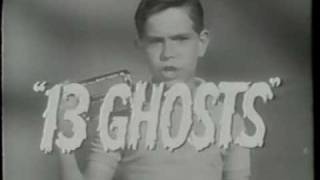 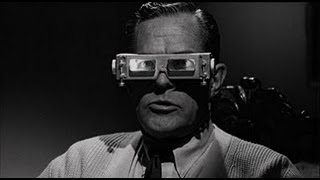 This high-spirited spook show from producer-director William Castle features a haunted house populated by the record number of ghosts in the film's title. The plot has the destitute Zorba family initially delighted at the news they've inherited the estate of their recently deceased uncle. The trouble is, the uncle was a ghost collector, and now that he's dead the ghosts are running around the house without supervision. The Zorba family's absentminded professor father (Donald Woods) finds a pair of weird glasses that enables him to see the ghosts. Young son Buck (Charles Herbert) thinks the ghosts are pretty cool, especially the headless lion tamer and his ghost lion. Attractive daughter Medea (Jo Morrow) is marked for death by a flying Ouija board and is later menaced by a shambling corpse. The mother (Rosemary DeCamp) is harassed by poltergeists who throw knives and pots around the kitchen when she's trying to cook dinner. There's also Margaret Hamilton as the witch housekeeper, Martin Milner as the smooth lawyer, and a secret treasure. Robb White wrote the scream-laden screenplay. All in all it's more fun than a barrel of ghost monkeys and perfect Halloween fare for the whole family.

An impoverished family inherits a ramshackle house that comes complete with a spooky housekeeper, a fortune in buried treasure, and a bunch of horrifying ghosts looking to be set free.

17%off
House on Haunted Hill
$8.30 Super Savings
Add to Cart