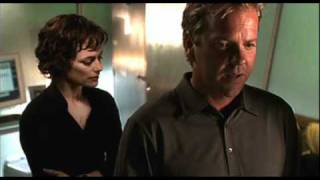 Sporting one of the most compelling premises in contemporary television, 24 unfolds in real time; each season depicts all 24 hours of one day. Following the activities of counter-terrorist agent Jack Bauer (Kiefer Sutherland) as he combats conspiracy and protects his family, the first two seasons saw him saving the life of a presidential candidate, and preventing the detonation of a nuclear bomb. Season three picks up three years after the close of the second day. Jack has just locked away Mexican drug lord Ramon Salazaar (Joaquim de Almeida) when a dead body infected with a deadly virus turns up in front of the LA Health Unit. It turns out that Salazaar's brother intends to blackmail the government with a biological weapon, bargaining for the kingpin's release. Palmer, the presidential candidate Jack had formerly protected, is running for reelection, and his girlfriend is withholding important information. No one is precisely what they seem to be as Jack races against the clock on what just may prove to be his last day ever...

24 - Behind the Scenes: The Editing Process
$5
Add to Cart

29%off
The African Americans: Many Rivers to Cross (2-DVD)
$25 Super Savings
Add to Cart