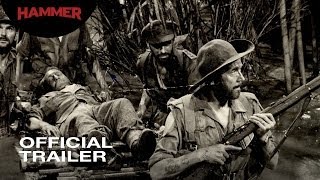 Val Guest directs this black-and-white scope film about a band of British soldiers in an enemy-held village. Cut off by the Japanese advance into Burma, Captain Langford (Stanley Baker) and his men seek refuge and attempt to gain information about an upcoming Japanese attack. When his interrogation fails to produce results, Langford horrifies war correspondent Max Anderson (Leo McKern) and a missionary (Guy Rolfe) by ordering two innocent villagers to be killed in an attempt to persuade an informer to talk. But Langford's harsh methods come back to haunt him when, after the Japanese retake the village, they too resort to senseless murders in their effort to get his cooperation. Newly remastered.

The scene is Burma during World War II. A small British brigade led by Stanley Baker comes upon a Burmese village controlled by the Japanese. The brigade wipes out the enemy, whereupon Baker discovers that the late Japanese commandant has a coded map secreted on his person. When a Burmese prisoner who can decode the map refuses to talk, Baker orders that two peaceful villagers be executed. Baker's actions seem cruel and extreme until it becomes apparent that the enemy is twice as ruthless as he. Based on a TV play by Peter R. Newman, YESTERDAY'S ENEMY is a brutal but insightful look at the blurred line between good and evil in wartime conditions.

Action | Enemies | War | Military | Violence
This product is made-on-demand by the manufacturer using DVD-R recordable media. Almost all DVD players can play DVD-Rs (except for some older models made before 2000) - please consult your owner's manual for formats compatible with your player. These DVD-Rs may not play on all computers or DVD player/recorders. To address this, the manufacturer recommends viewing this product on a DVD player that does not have recording capability.

The Siege of Firebase Gloria (DVD-R)
$19
Add to Cart